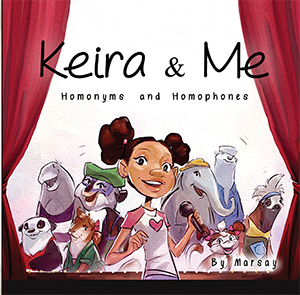 Many students find it hard to remember the difference between homophones and homonyms. To help with this difficulty, Flint-based educator and entrepreneur, Marsay Wells-Strozier has released a fun and educational book entitled,
Keira & Me: Homonyms and Homophones.

For K-6 students and adult learners in Adult Basic Education (ABE) and English as a Second Language (ESL) programs, the Language Arts Mechanics in this book are designed to help them understand how homonyms and homophones are used in our daily language and how to use them in a written sentence.

The book involves the adventures of Keira, a nine-year-old girl, who travels around the world singing with the Sally Court Club Band whose members are animals that are endangered species. Keira and the band are managed by her Aunt Marsay, a private primary school teacher. Keira and her band learn how to spell and use homophones and homonyms, which can be confusing to students, as shown in a conversation between Keira and her Aunt Marsay:

Keira: "Boy, do they sound funny! What are they?"

Aunt Marsay: "A homonym is a single word that has different meanings, but the word sounds the same each time you use it. Homophones are words that sound alike, but they are spelled differently and have different meanings."

Aunt Marsay: "No, Keira, homonyms and homophones can both be a lot of fun when you understand them."

In large scale print and vivid color, even adult learners will find humor in Keira and her friends as they give numerous examples to teach homonyms and homophones.
Tweet

Like every single time you are sharing new things in this website which
I was here to know. My kids are always taking interest to surf this
website every single time with the arrival of new blog shared here.<br />
<a
href="https://enkeechi.com/collections/health-beauty-products-online-store">best
skin care products for women</a>

That to educational book about the titles on the entrepreneurs have been
to karia and me title to homophones have. Homonyms are the other to
means <a
href="https://studentwritingservices.com/essays/#why-students-buy-essays">that&#39;s
why students buy essays</a>
to educational systems have been not for the books.

This was one my favorite book that I have been willing to read from the
very first time through this website. It has been really interesting
that you are having someone that could give you<a
href="http://www.ukbesteessays.com/">bestessays uk</a>
services and also spend time to entertain.

I purchased your book on Kindle back this summer. I really enjoyed this
for my two 6 year old twin daughters. Homonyms and homophones was a
little too difficult for them to understand, but the love the
characters.

I bought this book for my daughter on last week. She is biracial, and a
little too young for the content, but she loves for me to read her this
book. She laughs at the characters, and strangely sleeps with the book
at night. This book was purchased at a book fair here in Chicago. Can
you tell me how I may contact the author?

Your book is not sold at Barnes &amp; Nobles. How can I get an immediate copy?

Hello my name is Doris Longfellow, I am a 4th grade teacher in Nevada. I
was made aware of this book through Amazon. Do you offer a discount for
large orders?

My daughter Jasmine just got her book yesterday, and we love it! The
story line, beautiful characters, and Keira and Yum Yum are just
adorable. My daughter will be taking the book to school tomorrow in
Texas for show and tell. I thank the author for such a great learning
tool with powerful characters, that are needed within our schools.

I have had the pleasure to both read and attend book readings of Keira
and Me. The book is very creative and detailed, it&#39;s also colorful.
The book reading sessions I thoroughly enjoyed. I loved the enthusiasm
and interaction the children displayed. This book is very much needed
in our schools.

The book was great. You did a good job. We need more people like you in
this world that will take an interest to help others by using their
gifts and talents to make a difference. <br />
<br />

Your Keira &amp; Yo book is great!!! Students will be returning on
Tuesday, and I already have this book on my reading list. I&#39;m hoping
you can come to our school for a story time session this year. I will be
at your Grand Rapids book signing later this month. I look forward to
meeting you. <br />
<br />

Marsay is my niece. I congratulate her on a job well done in publishing
Kiera and Me. I&#39;m sure it will be beneficial and an enjoyment to all
that reads it. Keep up the good work. I love you.

This book is Wonderful! I bought the book for my daughter this summer,
and she loves it. The drawings in the book are so beautiful. Yum Yum is
our favorite character. Keira &amp; Me is greatly needed in our African
American schools. I wish Marsay the best!